Nodor started out in 1919, manufacturing modeling clay. The company name was derived from the fact that the clay had “no odor.” They started producing their first dartboards in 1923, which were made using clay. The clay dartboards never caught on, and Nodor switched to making the traditional elm dartboards that were popular at the time.

It is during 1931 that one of the greatest innovations in dartboards came into being: the bristle dartboard. The idea had been suggested to the founder of Nodor by a local pub owner and after some refining, the two filed a patent for the dartboard. Four years later, the first bristle dartboard, the Nodor Original Bristle, hit the market.

Faced with rising costs of manufacturing and markets flooded with cheap imports, Nodor’s production facilities moved to Kenya in 1999 to ensure they could continue producing the highest quality boards at competitive prices. Nodor had always faced stiff competition from local rival dartboard manufacturer Winmau, but this came to an end in 2002 when Winmau was bought out by Nodor.

The Nodor dartboard selection is top notch, as you might expect from the company that brought the world its first bristle dartboard. All Nodor dart boards are made of the highest quality East African sisal, which is often used for some of the best marine ropes. Nodor was the the first company to offer a staple-free bullseye, with slanted edges to guide the dart into the target. The latest incarnation of this innovation, Supabull II, is found on all their boards. 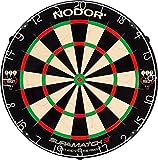 Rounding out the main lineup of dartboards is the Nodor Supabull II. This takes its name from the original staple-free bullseye wire first developed by Nodor.

Along with Nodor’s top quality lineup of dartboards, they offer many products for the complete darts experience.

Nodor darts are available in all shapes and sizes, from brass construction to 95% tungsten. With a large range of darts in both steel-tip and soft-tip, you are sure to find a dart to fit your style.

You will also find an extensive range of colorful replacement flights for your darts, along with numerous styles of shafts to keep your darts in top shape.Of the other accessories available in the Nodor range, you will find dartboard cabinets, dartboard surrounds, mats, dart cases, replacement dart tips, and many other dart accessories to keep you on top of your game.